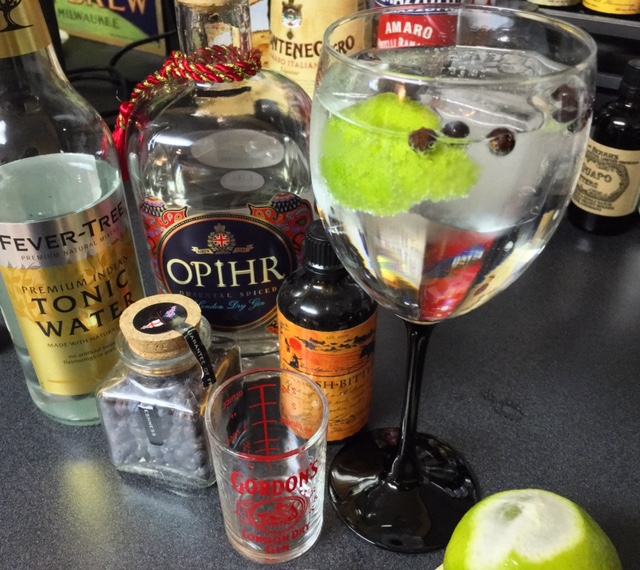 A brief scan of the headlines or just a few minutes of TV news is all it takes these days to leave you feeling like you could use a drink. I’ll try to help with that.

The world is a different place than it was the last time I posted. As the band Firewater says, These are Dark Days Indeed. So I began rethinking my approach to this blog and what I wanted to write about.

As I came to the conclusion that nearly every day there were events practically crying out for the cocktail that would help make the day easier to swallow, someone at Quartz had a similar idea. On Inauguration day itself, Anne Quito wrote “Death in the Gulf Stream” to tell us Ernest Hemingway has a cocktail recipe for days when you’ve had just enough of the world.

Anne notes the drink, Death in the Gulf Stream, is strong and bitter as it is essentially gin, lime juice and Angostura bitters on ice. Hemingway called it his salve for the dark year of 1937, when he was a war correspondent in Spain.

The choice of 1937 to pull a drink from was appropriate, not simply because it was an even 80 years ago, but because Hemingway gave a speech that year that resonates with the events of the past couple of weeks. In his book To Have and Have Another, Philip Greene tells us Hemingway said: “There is only one form of government that cannot produce good writers, and that system is fascism. For fascism is a lie told by bullies. A writer who will not lie cannot live or work under fascism.”

Greene was making the point in talking about Hemingway’s short story “The Denunciation.” It is a very good, and often overlooked, story about responsibility set in Civil War Madrid, at Chicote’s bar (it is still there and on my list to visit should I ever get to Madrid). It is well worth the read, and timely as we are all being tested on our responsibilities to each other and ourselves.

Like Greene, I’ll turn my focus to the drink in the story, a gin and tonic. For Hemingway, it was Gordon’s gin and Schweppes tonic, and there is the suggestion that some Angostura may have been involved. For Hemingway, in besieged Madrid, it was a marvel. Today, however, Spain is the epicenter of amazing creativity in gin and tonic, or gintonic as it’s called.

Typically made in a copa de balón, Spanish G&T’s are known for a wide variety of garnishes. This could be fruits, veggies, spices, herbs or a combination. The end result is always refreshing, and refreshing is something we could all use right about now.

I made mine tonight with 2 oz of Opihr gin, Fever Tree tonic, juniper berries, and lime. You can find more recipes here and here.

One thought on “Refresh and Restart”