President* Trump is doubling down on one of the most bizarre weeks he’s had in office (King of Israel and The Chosen One being key moments). Today he is busy embarrassing America on the world stage at the G-7 meeting in France, being Putin’s errand boy arguing for Russia to be re-included in the meeting despite its being kicked out for invading Crimea. And he is trying to claim other world leaders are asking him, “Why the American media hates your country so much. Why are they rooting for it to fail?” But it’s probably just all the unborn chicken voices in his head.

Coming on the heels of Trump’s remarks on his trade war with China on Friday that sent markets into a tailspin, the Disruptor in Chief has been even more erratic than usual, prompting James Fallows to write a piece for The Atlantic called “If Trump were an Airline Pilot,” examining how if Trump were in any number of regular jobs of responsibility and exhibited his recent behavior he would likely be removed.

Unfortunately for America, President Looney Tunes isn’t going anywhere because his Republican enablers in Congress clearly put party over country. Still, you have to wonder if it might sink in with Republicans that this force of destruction could endanger their own reelection prospects. Which also makes it curious why they wouldn’t just remove Trump (impeachment or 25th Amendment) and be just as happy or happier with a less erratic but even more Christian Right-wing President Pence.

While you sit back waiting for the next lunatic thing from Trump to emerge from the G-7 Summit this weekend, have a Chaos Monkey cocktail. Via Kindred Cocktails, the Chaos Monkey (named for the book about Silicon Valley) is:

1 barspoon Amargo-Vallet, or substitute with a dash or two of Angostura bitters and a dash of demerara syrup

Stir over ice, strain into an old fashioned glass with a large cube/sphere. Garnish with a lemon peel, expressed. 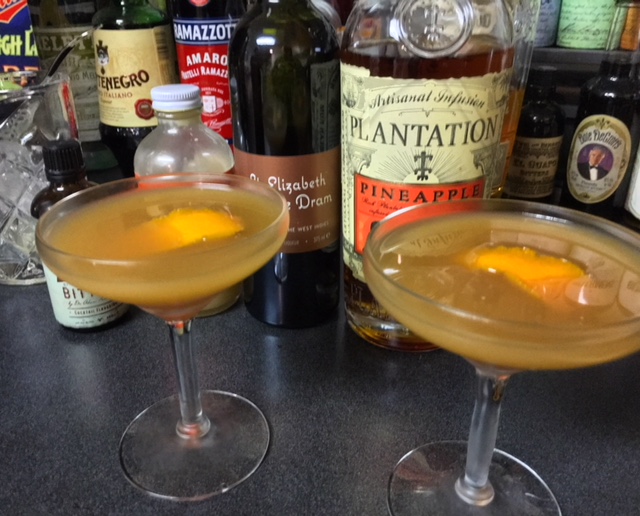 The most frequently used word in headlines over the past week has been chaos.

As Dan Balz notes in The Washington Post today, however, Trump promised just this kind of presidency. But for all the commentary that tries to liken the Trump presidency to a reality show, this week may point to a different TV genre and show.

We may be in an episode of Get Smart. Nevertheless, the past year and definitely the past week, has certainly been a battle between CONTROL and KAOS. Trump is absolutely the Mr. Big of KAOS right now, and Sebastian Gorka is straight out of Mel Brooks’ central casting for KAOS agents. (Not saying Mueller is Agent 86, btw.)

All of the chaos of the past week has led to a nearly universal feeling of being on the road to ruin. On one side are people fearful of the negative effects of a trade war, destruction of our democratic norms and atomic annihilation, on the other side are Republicans facing this fall’s elections.

While we watch Trump walk back meeting with Kim Jong Un and maybe not impose tariffs on allies, adding to the long list of erratic policy behavior, have a Smooth Operator cocktail.

Via Kindred Cocktails, the Smooth Operator is: